Today, almost everyone in our country is aware of the martial art, KARATE, and it is taught by instructors at many schools and private clubs.

Empty hand fighting is as old as man itself. Innumerable systemised forms of empty hand fighting have been developed all over the world, each reflecting a little of the national culture. That which we call karate is just one of them.

Karate is also a way of life, a way of being.

A karate-ka deals fully with the present moment, being totally absorbed in one action only. A true Karate-ka seeks balance and harmony in his or her life; the karate-ka develops a strong body and spirit so as to better serve others. Karate is not something with which to win a competition, nor is it something to make a strong exponent stronger still; on a much larger scale it teaches the WAY OF HUMANITY. It is something that enable people who learn karate to further develop their character; thus each person is able to make a marvelous contribution to society.

True Karate is a physical art, a technique of self-defence and a sport. One of its greatest attributes is that anyone, irrespective of size, age, or sex can practice this art. Your degree of skill, of course, depends on these factors. However, one can practice Karate according to his own capabilities or, if he has them, handicaps.

There are four major schools (styles) of Japan Karate Do: Shotokan, Shito-ryu, Goju-ryu and Wado-ryu.

Each style has different strong points and ideas about technique. Shotokan stresses on dynamic, straight movement. Shito-ryu, stresses quicker, angular movements for speed and power. Goju-ryu stresses circular movements to produce power. Wado-ryu stresses the movements of traditional jujitsu. Each style's techniques are, of course, a result of it's history and development.

Our school's style is Shito-Ryu. It was founded by Kenwa Mabuni (1887-1952) an Okinawan descendant from the "Bushi" or warrior class.He practice two styles of Karate from Itosu and Higashionna (Higaonna) plus Shinden Fudoryu Jujitsu as well. He put them together and he created his style which is named "Shito-Ryu" The name Shito-Ryu was developed to honor two of Kenwa Mabuni's karate teachers, Itosu and Higashionna (the first kanji in Itosu sounds like "shi" and the first kanji in Higashionna sounds like "to" while "Ryu" means "style" or "way of doing").

Shito-ryu is one of the largest styles of Japanese karate today and is represented by many schools world-wide.Owing to its founder, Mabuni, Shito-ryu is the most diverse and complete of the major karate styles today, with over 60 kata originating from Shurite, Nahate, Tomarite, and Shaolin White Crane systems. Shito-Ryu is broad and still distinct.

It emphasizes on Kihon (basics)(see curriculum) at the beginning, but for a senior Shito-Ryu student, quality and quantity run together. Shito-Ryu contains all the eighteen Shorin-Ryu katas, all sixteen Shorei-Ryu katas, the Chinese white crane katas, plus the katas devised by Master Mabuni himself from his broad knowledge and experiences, bringing us to the total of more than sixty katas.

Moreover, the distinguishing feature of Shito-Ryu is that it lives together with Kobudo (weapon arts) and sometimes Iaido (sword arts). The Kihon, Kumite, Karate katas, Kobudo katas, Iaido katas and the principles & messages behind them made the treasury of Shito-Ryu so magnetic and demanding that Shito-Ryu deserves a lifelong dedication to practice and perfect.

Since Shito-Ryu is the style at our school, we favor the performance of smaller, quicker, angular movements for speed and power. The repetitions of these movements not only develop the power to perform them, but also the stamina to perform them during Karate-Do training or to carry out the routines of daily life.

Go Do Shin (Five Fold Path of Shito-Ryu Karate Do)

The aim of Karate 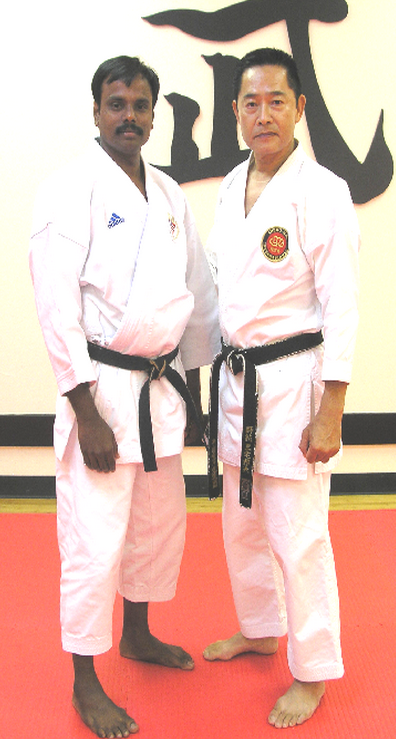